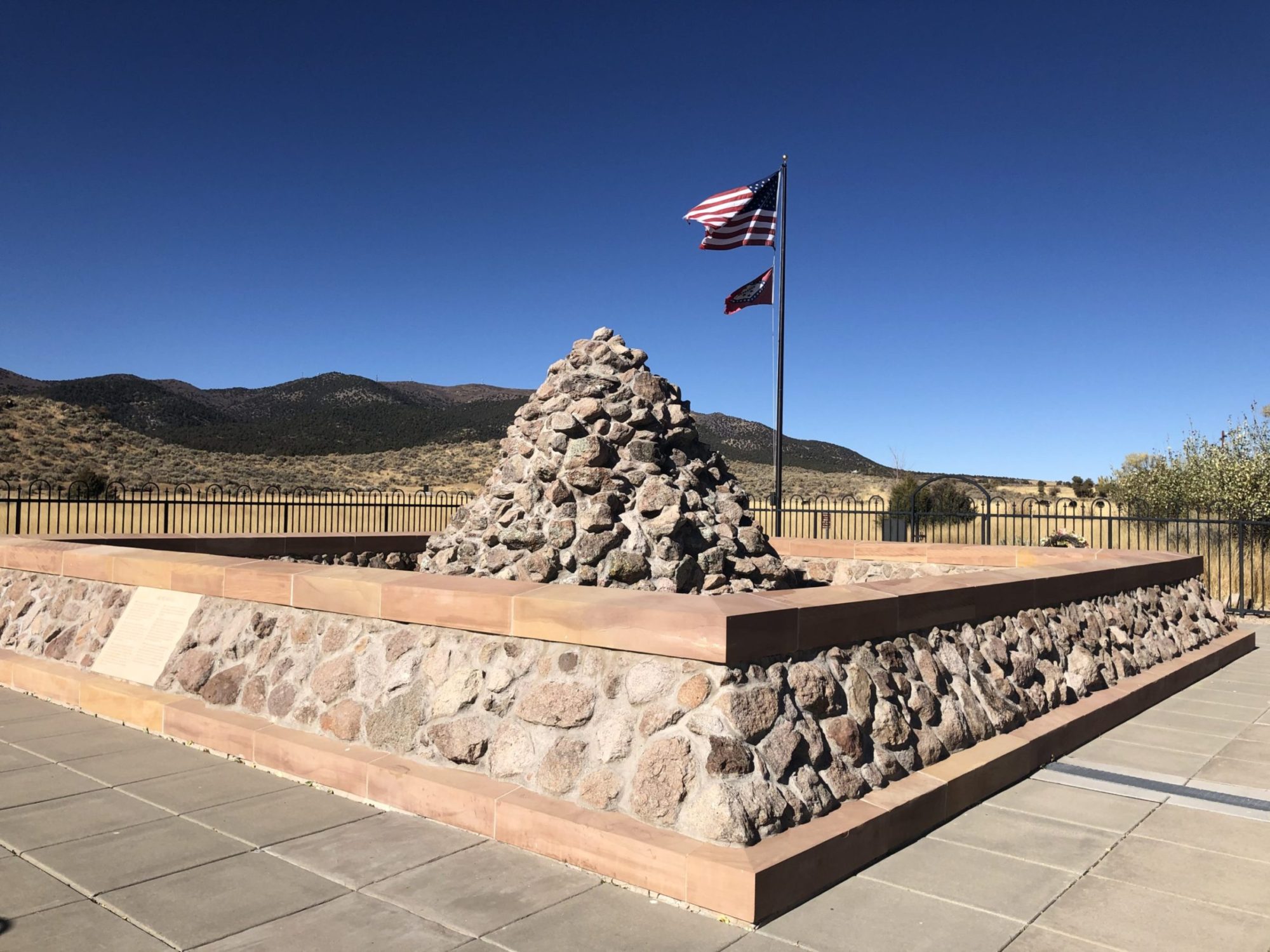 Sixty years ago, descendants of massacre victims gathered in downtown Harrison to dedicate a monument to those who died at Mountain Meadows and the 17 children who survived. The keynote speaker at that dedication was Mormon author Juanita Brooks.  In attendance were several sons and daughters of massacre survivors. The three organizations representing victims and survivors of that tragic event are meeting in Harrison on September 11-12 to memorialize the victims at the monument which stands on the Northeast corner of the town square. The memorial service will be held on Saturday, September 12.

The 2015 Annual meeting of the Mountain Meadows Monument Foundation will be held in Harrison, Arkansas on September 11-12. Ten to fifteen rooms have been reserved at the Quality Inn at a rate of $76.49 per night. More will be arranged as needed. The Quality Inn is located 2.2 miles from city center and 19 miles from Branson, Missouri. It has an excellent rating of 4.2. Call 1-800-228-5150 or 879-741-7676 for making individual arrangements. Cutoff date for reserving rooms is September 1.

The banquet will be held on September 12th at a meeting room at Quality Inn. Jamie’s will cater banquet meals for $15 per person. Please bring items for the benefit auction. Coy Fancher will be bringing a beautiful hand-made knife with names of massacre families engraved on the blade. Burr Fancher has committed a quilt of historic cattle brands comprised of eighty 8.5” x 11” blocks. Auction items of historical interest and/or regional significance are encouraged. Money from auction will help in expanding the massacre story across the United States.

The keynote speaker for this event will be Everett Bassett. Everett is Vice President of Transcon Environmental.  Transcon is headquartered in San Francisco, California and is the consulting archeologist for the power line projects currently underway near Mountain Meadows. Everett has worked throughout the southwest as an historical archeologist and is a permitted cultural resource consultant in the State of Utah. Everett will give a presentation on his recent work and the implications for sites associated with the massacre.

A newsletter with specific agenda items will be mailed out in August after MMA, MMMD and MMMF establish plans for a joint program for the 60th anniversary of the dedication of the monument in downtown Harrison.

The Mountain Meadows Monument Foundation has a plan that specifies what needs to be done (goals and objectives –WHAT), how it is to be done (strategies/activities- HOW); when it is to be done (timelines – WHEN); and who is to do the job (responsibility agent –WHO). The work plan  will be available on the MMMF web page and at our annual meeting. It will focus on the following issues:

GOAL 5 – REPLACE CROSS ON MOUNTAIN MEADOWS GRAVE: Determine size, wording on cross, type of material appropriate for site and construction steps, fomulate ideas into a cohesive proposal with rationale, historical background and importance to relatives of massacre victims, present proposal to LDS Church and solicit their response, proceed with construction plans if LDS response is positive,  implement long range strategies for achieving goal of acquiring a cross on Mountain Meadows grave if response is negative.

Two books have been reviewed by MMMF members and deemed appropriate for inclusion into our fourteen library collections.  We also wish to encourage MMMF members to read these books.

“The Mormon Problem: An Appeal to the American People with an Appendix with four Original Stories” by C.P. Lyford. Reprint in 2013, available on Amazon for $13.71 in paperback format.

On his way down past this spot, and before my arrival, Captain Campbell had caused to be collected and buried the bones of 26 of the victims. Dr. Brewer informed me that the remains of 18 were buried in one grave, 12 in another and 6 in another.

On the 20th inst. I took a wagon and a party of men and made a thorough search for others amongst the sage brushes for at least a mile back from the road that leads to Hamblin’s house. Hamblin himself showed Sergeant Fritz of my party a spot on the right-hand side of the road where he had partially covered up a great many of the bones. These were collected, and a large number of others on the left hand side of the road up the slopes of the hill, and in the ravines and among the bushes. I gathered many of the disjointed bones of 34 persons. The number could easily be told by the number of pairs of shoulder blades and by lower jaws, skulls, and parts of  skulls, etc.

These, with the remains of two others gotten in a ravine to the east of the spring, where they had been interred at but little depth, 34 in all, I buried in a grave on the northern side of the ditch. Around and above this grave I caused to be built of loose granite stones, hauled from the neighboring hills, a rude monument, conical in form and fifty feet in circumference at the base, and twelve feet in height. This is surmounted by a cross hewn from red cedar wood. From the ground to top of cross is twenty four feet. On the transverse part of the cross, facing towards the north, is an inscription carved in the wood. “Vengeance is mine; I will repay, saith the Lord.” And on a rude slab of granite set in the earth and leaning against the northern base of the monument there are cut the following words: “Here 120 men, women, and children were massacred in cold blood early in  September, 1857. They were from Arkansas.”

Martha Elizabeth Baker Terry was born on March 7, 1852 in Boone County, Arkansas.  She was the daughter of George and Manerva Beller Baker and granddaughter of Captain Jack Baker. After the massacre she lived in John D. Lee’s home until rescued by Dr. Forney and Captain Lynch.  She recalled playing with children of Brigham Young.  She was returned to the custody of Grandmother Mary A. (Polly) Baker of Crooked Creek Township of Boone County, Arkansas.  On January 25, 1874 Martha Elizabeth married J.W. Terry.  She raised nine children, six girls and three boys.  She died on March 15, 1940 and is buried in the Speer Cemetery near Capps, Arkansas.

Members who might prefer to receive the newsletter by e-mail can request it by contacting the newsletter editor at Docfancher@comcast.net.  Savings on stamps can be directed toward other Foundation priorities.

Membership dues fund our newsletter mailings and publicity expenses related to news releases with any surplus directed toward our work plan.  Dues are $20 per family. Lifetime memberships are $250. We urge you to update your membership and bring friends and relatives into the Foundation. Together we can achieve the objectives of our work plan.